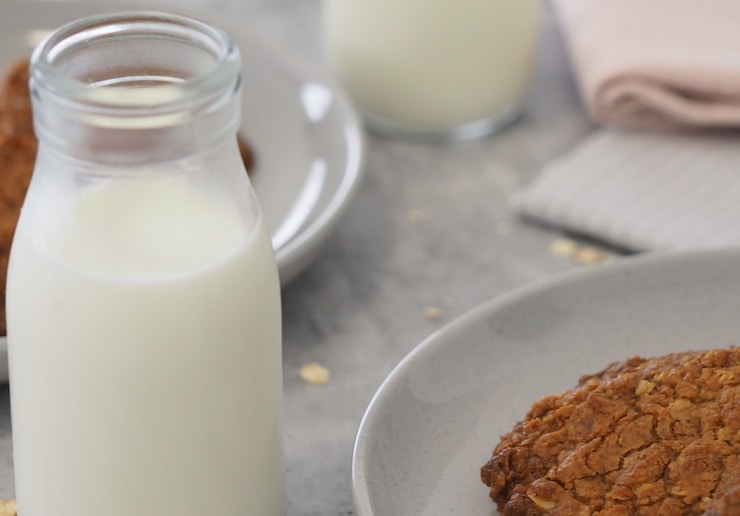 So, you know you have a problem with dairy and you’ve switched to lactose free, but you’re still not feeling great. This is a common scenario and is understandably frustrating. Replacing our favourite foods is never easy and becomes even harder when we don’t get the desired health results. After all no one wants to make sacrifices for nothing!

It is important to understand though that milk contains components other than lactose. These components can also be difficult for us to digest. What’s more, it’s worth knowing that difficulty tolerating some dairy products doesn’t necessarily mean that you need to avoid them all. Let me explain further…

Lactose in milk is a type of sugar and individuals who are lactose intolerant have problems digesting it. This is commonly due to a deficiency in lactase (an enzyme that breaks down lactose). When lactase is inadequate, the lactose in milk moves into the colon undigested and gets fermented by bacteria. This in turn, causes the all too familiar symptoms of bloating, gas, diarrhoea and stomach cramps.

Lactose intolerance is common and there are a number of reasons why you may be affected. In rare cases, lactase intolerance is present from birth and very little (if any lactose) is produced. More commonly, we stop making lactase after the age of 5 (this can be even younger in African-Americans). For some of us though, lactose intolerance happens much later in life. This can be caused by injury to the intestines or by a condition such as coeliac disease, Crohn’s disease or small intestinal bacterial overgrowth (SIBO).

Lactose is not the only difficult to digest component in dairy

If you have tested negative for lactose intolerance then you may feel justified to continue eating your favourite dairy foods. Unfortunately though it is possible that you may still be reacting to other compounds within dairy.

One such compound is the protein in dairy, specifically a protein known as casein. Researchers have discovered that the A1 casein sub-type is a common cause of milk intolerance and causes a range of problems. These include the all too familiar symptoms of bloating, abdominal pain and diarrhoea. The good news is that it is now possible to purchase milk containing only the A2 casein sub-type. This is associated with far fewer digestive symptoms and is well tolerated by many.

In addition to the lactose and casein in dairy, another issue is the fat which can also cause digestive problems. If fat is the culprit then eating low fat products such as skimmed milk, low fat yoghurt and cheese may help to reduce symptoms. You will also want to avoid cream which is especially high in fat (although very low in lactose).

Intolerance to milk doesn’t necessarily rule out all dairy

Often the realisation that milk is affecting health, leads to an exclusion of all dairy foods and foods containing dairy. This may be helpful in some situations, but it is worth knowing that this may not be necessary.

Of all the dairy foods then milk is arguably the hardest to digest. This is because it is both high in protein and in lactose. Full cream milk is additionally high in fat – a tripple whammy! Butter on the other hand may not cause issues for those with slight dairy intolerance. This is because it contains only tiny amounts of lactose and milk protein, being predominantly comprised of fat. Ghee is even better, since the milk proteins have been removed leaving only traces of protein and lactose.

The impact of cheese varies depending upon the type of cheese. If you are lactose intolerant then you will probably be best to avoid creamier types of cheese such as cream cheese or cottage cheese. Swiss cheese and varieties such as cheddar, gouda, parmesan are much lower in lactose, although not lower in milk protein. Blue cheeses are particularly beneficial for digestion, because the bacteria in the cheese helps to break down the lactose and some of the protein, making less work for us.

Like aged cheese, fermented dairy foods like yoghurt and kefir tend to be easier to digest because bacteria in the food has removed much of the lactose. Kefir is particularly beneficial because it also contains probiotics. Not everyone will be able to tolerate fermented foods though. This is partly because they still contain some lactose and protein, but also because they can be high in histamine which can lead to reactions in some people.

If you have a true allergy to milk and dairy products or you are severely lactose intolerant then you will need to strictly avoid all dairy foods and foods containing dairy products. If this is not the case then it is worth considering testing to understand whether you have an issue with lactose intolerance, dairy protein or fat digestion. You will then be able to experiment in a controlled way to see which dairy foods you can tolerate. Often then by working on your digestive health, it is possible to reintroduce a fuller range of dairy foods at a later date.

Download my free eBook 10 Steps to Superhealth for free. Just fill in the form below.